Hello everyone, it’s time for the fashion demoness to make her debut.

Bix has been after me to become the Newsers fashion reporter for awhile, so I finally caved. To start, I plan to do a review and comparison of various mesh bodies, their ease of use, things I like and don’t like, and so forth. This is going to be from my perspective, so don’t take it too seriously.

For those who don’t know me, I am Valkyrie, the resident succubus of Club Cutlass and a member of the Sunbeamers team in RFL. I’ve been modding avatars since I first came to Second Life, and Bix has been snapping pics of me most of that time, so I suppose that’s why he wants me to be the fashion reporter.

So, to start, my first review is going to be on the Legacy Mesh Body, the classic version.

I have chosen the Legacy for my main mesh body for three main reasons, first because of all the various bodies I have tried, it comes the closest to my Lena Lush in ease of modding, overall form, and ability to match my excessively curvy body shape without being ridiculously exaggerated.

As you can see, I am petite but voluptuous, with an emphasis on being cute and huggable. The Lena allowed me to be about a cup size larger breast-wise, but the limit on the Legacy is about a large DD. The actual shape of the breasts looks quite natural without being oddly deformed, with nipples that point forward and not upwards at a 45 degree angle, like the Slink Hourglass of the older Lolas add ons. The skin being used is default #3 which is closest to the anime skintone I generally use to match my M4 head. The legs are properly proportioned, with neither gigantic thighs, or ridiculously skinny calves. The skin includes it’s own HUD driven speculars to provide a natural, oiled, and wet sheen. The skin texture itself is very natural looking, and goes from a very pale to a nice dark in natural gradations. It can also be tinted as desired. 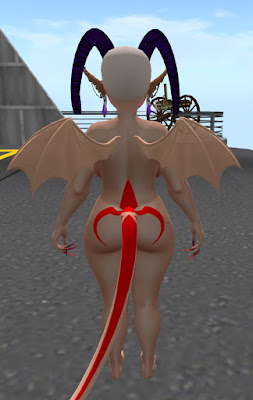 From the back, you can see that the derriere has a very nice pear shape, without being ridiculously projected outwards, which was a major quibble I had with the Lena Lush and Kupra, both of which allowed up to EE sized breasts, but given the overall improvements in body shape I am willing to deal with slightly smaller breasts for the more realistic body proportions in the hips, legs, arms and rear. 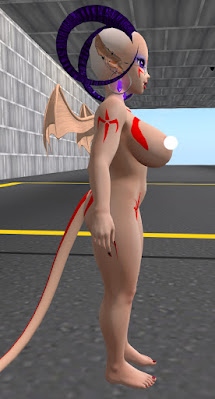 The sole “problem” I have is the way the skin is stretched on the side of the breasts, as you can see that the arc of my tattoo which should be a symmetrical curve down to a point is a little distorted, but that is something I can fix by tailoring the tattoo itself. The body itself has no problems with the side profile, with the breasts falling naturally without excessive “jutting” which makes it appear they are laying on an invisible platform. The hips are naturally tilted without an excessive back arch to make the “booty” stick out so far you could use it for a serving tray, or thighs so massive they need their own zip code. 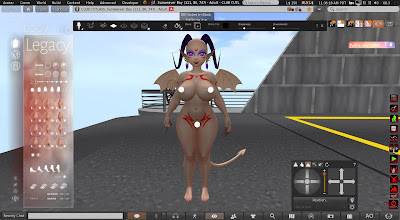 And now we come to the Legacy Control Hud, which is what makes the body so good for modding. There are actually two parts to the HUD, the main, which is to the side, and the customization HUD which is the bar up top. The customization hud is what allows you to set textures to the various layers, which are the Tattoo, Inner, Middle and Top layers. With the HUD you can not only create custom clothing layers from your own textures, but you can also set bump and shine, with control over gloss, environment, and tint for the speculars. You can also individually control Glow and Transparency per layer.

The main HUD controls the inbuilt body gloss and bump, neck size adjustment for matching you preferred head, Nail shape and length or nail removal for add-on nails like mine. The Bento hands can be controlled separately or run random animations, while there are five foot settings for shoes. So far, most of the “The Mesh Project” sized shoes I have tried fit just fine. Additionally you can turn off/on any individual layer of clothing as well as add sock and glove “covers” when needed. The other two buttons on the hud allow you to pick a skin tone, or switch the body to BOM mode, and control alphas. The alpha system is one of the best I have seen to date, which allows you to subdivide actual sections of the alpha map into smaller pieces to customize exactly what needs to be hidden. 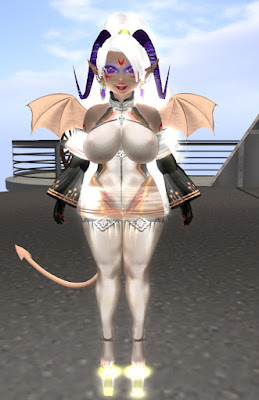 And now to show a full outfit with glows and speculars. With the Customization hud, I modified my B@R Cygmalio outfit to full bright with a ten percent glow to make this version, which is perfect for staying visible in the darkest Club. With some modding knowledge, you can create all sorts of special effects for your old texture only clothes. 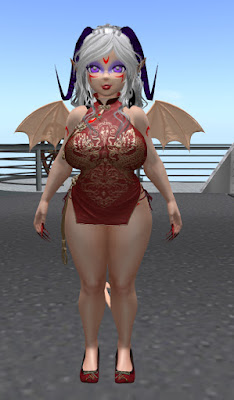 But let’s be honest, most of you will probably want to know more about mesh outfits, which to be honest is probably the weakest point of the legacy at this moment, since it’s a new mesh and is still being more widely supported. It does, however, appear to me to be a strong contender with Maitreya, with many clothes makers already supporting legacy versions, and even Gatcha clothes becoming more available. While it is not yet as universal as Maitreya, I do think that is going to change over the next year.

Additionally I haven’t yet found a Omega Applier setup for Legacy, though since the older Mesh Project had them, they will be out eventually if not already and I just haven’t found them. This makes it possible to wear your own skins only in BOM mode, which reduces some of your modding possibilities, and the only way I have figured out to change the body out of BOM mode is to select the skin in HUD again, which will erase the clothing layer settings. This is easy to work around by simply putting a copy of the body into any BOM outfit folder and leaving it exclusively for that outfit.

So in conclusion, The Legacy is wonderful in many ways, but also has it’s drawbacks. It depends on what exactly you want from a mesh body. For mod-ability, I would rate it about an 8, For complexity it’s about a 5, as the low triangle count of 12.3k is offset by the fact that hands and feet require separate attachments and add an additional 5K to the overall rendering weight. The BOM is great, but the lack of a means to mix BOM and custom clothing layers (so far as I have been able to figure out so far) and the lack of applier skin support yet reduces the score to a five as well. For adaptability to an array of body shapes, I would give it another 8, but that’s only because I would prefer slightly larger breasts than DD, as I am normally a E-Cup. The funny thing is it comes with a clothing deformer that can make a mesh outfit the right size, but which does not affect the body in any way.

Anyway, that’s Val’s review of the Legacy Mesh, and next we will look at the Maitreya.  And feel free to comment, and if you notice any features I am missing, or know any tips or tricks I don’t, feel free to let me know. I’ve only owned it for a week, and still learning, so if you know something I don’t, let me know!