Free or Low Cost for Furries: A Rant and Some Good News

Our esteemed boss and editor, Bixyl Shuftan is a fox. I don’t mean he’s handsome, although that’s true. I mean that he’s a fur. If you look at the roster of reporters for SL Newser (http://slnewser.blogspot.com/p/meet-crew.html ) you will find that there are many on the crew that sport furry or animal avatars. DrFran has been to known to don a Siamese cat or obsidian panther at times, and her alt Desirée is a white tiger when not a human. Thus, the aforementioned Desirée set out to explore freebies and low-cost alternatives for the furs in Second Life™. There was sound reasoning to back this: If the staff is fur then perhaps the readership was made up of some furs. With that in mind Desirée set out to find some fur freebies.

There are many people in Second Life™ who decry the wealth of freebies that are found in many stores. Some folks who have businesses think that good quality free items hurt their profits, and keep people from shopping. I disagree totally with this stance. You may have guessed that I love hunts, and finding freebies. A grid-wide hunt can send me hopping from store to store to store searching out items. What many store owners realize is that if I find something I like in a hunt, I do go back and look at the inventory in the shops. I have spent tens of thousands of Lindens buying items from stores I would have never known about had it not been for a hunt item I found there. Hunts are good business, in spite of the hordes of people who will grab the freebies and never come back. When I find something good on a hunt my friends want to go to the shops, and they often spend a lot of money as well.

That said; let me talk about the dearth of high-quality free items for furs. I was horrified when I check the marketplace for furry items and found mostly tails and mods that looked like they were circa 2006. What’s up furry creators? Many fur avatars cost a decent amount of money, and if someone spends that, they will want to dress up that avatar in a similarly fine manner.

Why are there so few free or low-cost freebies for furs? Desirée quickly reasoned that since most anthro-furs could wear human clothes, that maybe it was not a bad idea to do a hunt that was not specifically for furs, because there were no hunts running right now that were for furs. Clearly, if there’s a smart furry outfitter out there, this is the time to get going!

Before you fall off your seat…The Femboy Hunt (http://femboyhuntsl.blogspot.com) has always been a favorite of DrFran’s, because while supposedly for male avatars that like to dress female, the hunt usually has great items that anyone can wear. As you will see, Desirée was not disappointed. 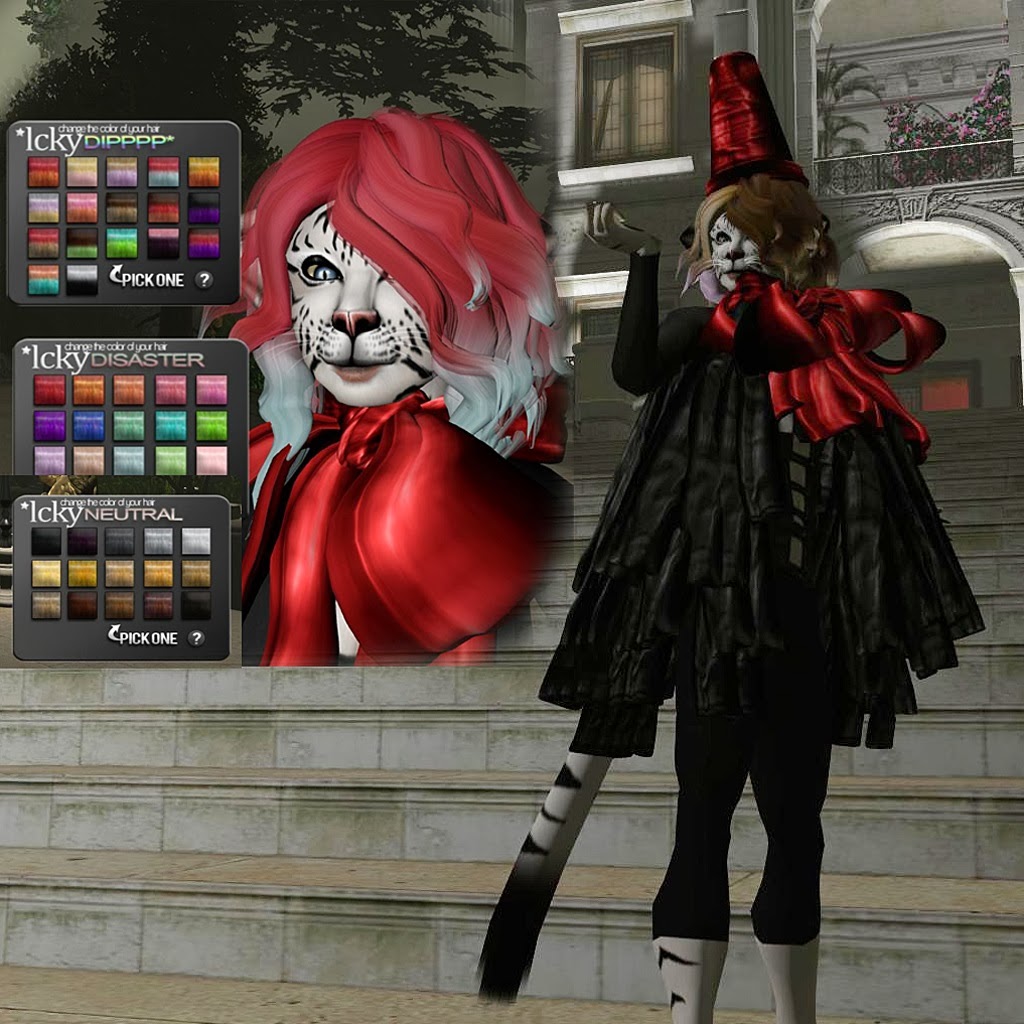 The theme of this fourth hunt was Gender-Bending Grimms, and each of the gifts was linked to a different fairytale from the Grimm Brothers. What’s really nice is how the website is organized to provide a link to information about each of the fairytales, so that if you are interested you can find out more about each story. Desirée had little difficulty finding the hunt object, a sculptie that says: femboy, but she will only show you her favorite hunt finds. As you will see, they are fine for female furs.

The outfit in this photo is based on the fairy tale Trusty John, that was unfamiliar to me, and it does come in a male and female version. Vero Modero (http://maps.secondlife.com/secondlife/Vero%20Modero/120/149/28  ) created this lushly textured outfit with cape and hat. 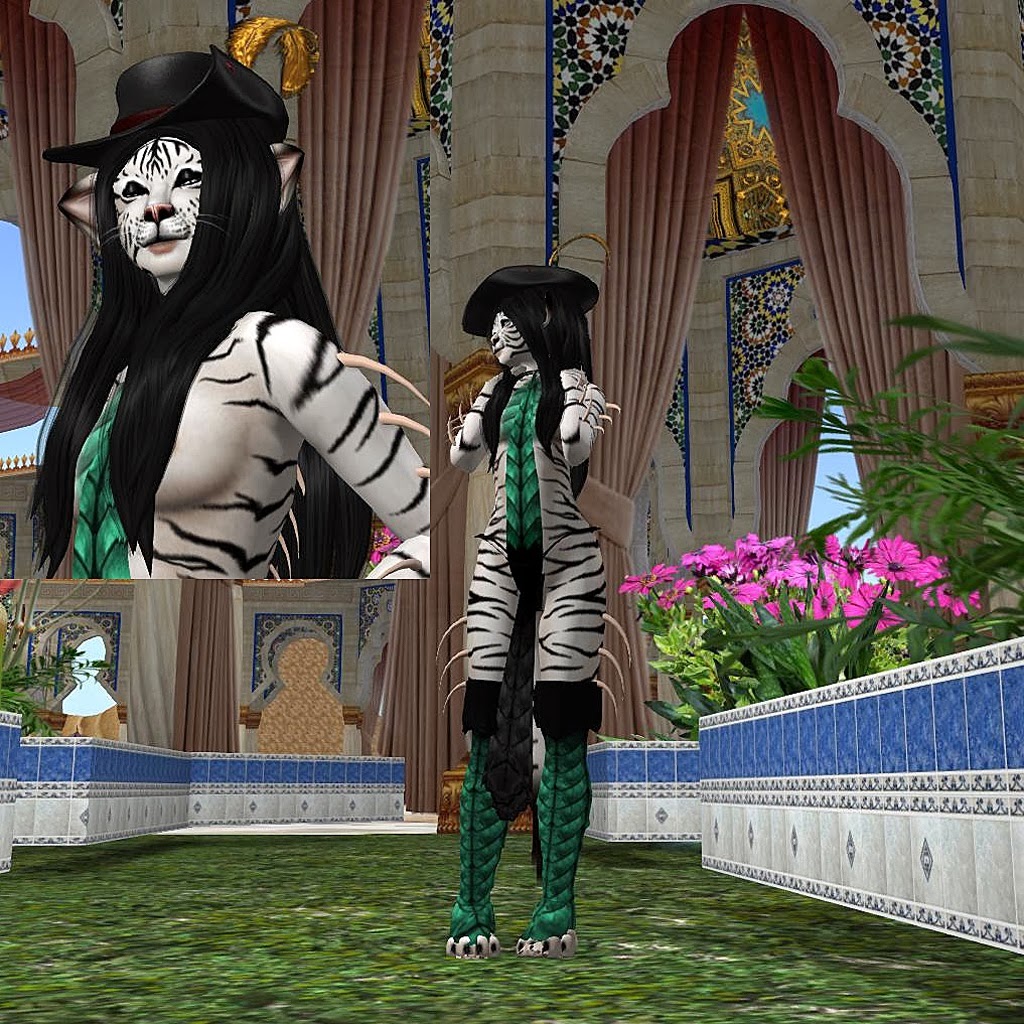 The hair was inspired by the story of Hansel and Gretel, and it’s a wonderful value, because it comes with three HUDS that allow you to change the hair color. It is a mesh hair, but fit Desirée perfectly. Just in case it doesn’t fit, there are unrigged versions of the hair. The hair is from LCKY (http://maps.secondlife.com/secondlife/My%20Home/34/240/1920  ), and it was the first time visiting this store that had some wonderful anime-inspired hairs. 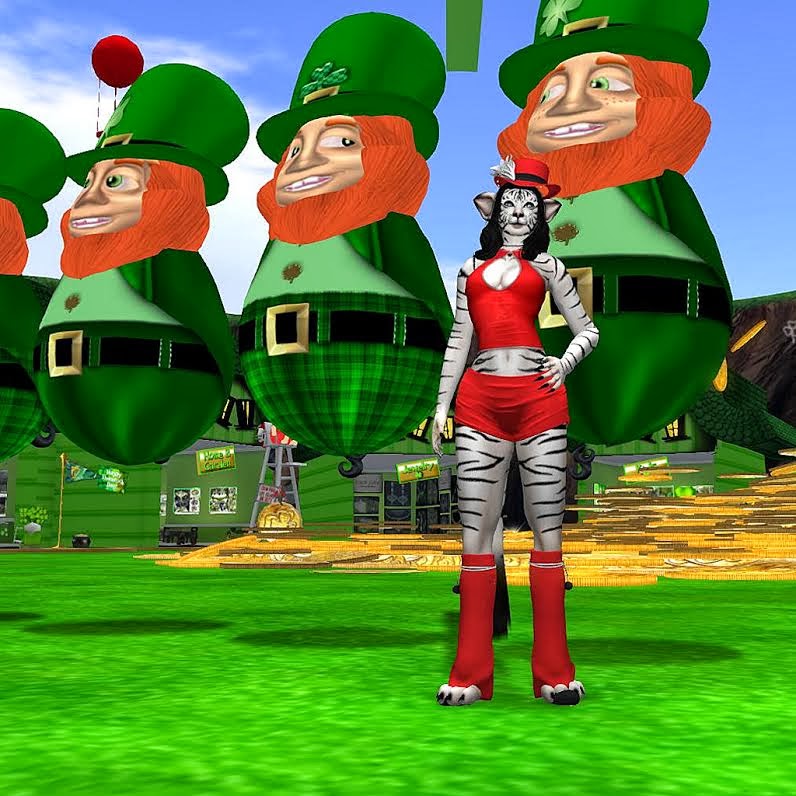 Who says furs can flaunt mesh? Desirée looks stunning in this fire-engine red ensemble inspired by the fairytale Little Red Cap, another obscure story. The outfits is from Rainbow Rock Candy (http://maps.secondlife.com/secondlife/Antovic/105/145/1921 ), and it looks just great in contrast to the green holiday that is approaching. 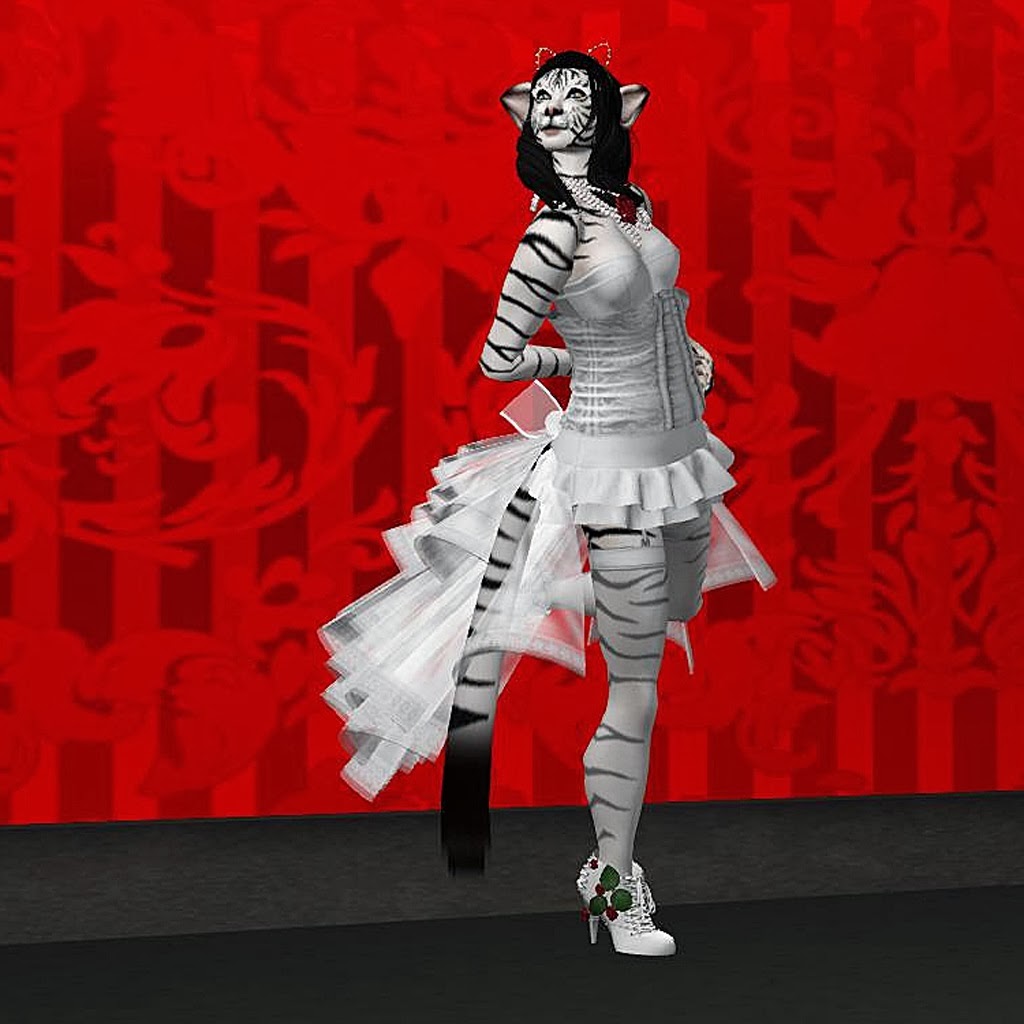 This prize, from Gomun Horangi (http://maps.secondlife.com/secondlife/Antovic/122/175/1921 ), based on the well-known tale of Sleeping Beauty. This was Desirée’s favorite prize, and came from a store that was unknown prior to the hunt. DrFran brought many friends to get the prize, and all of them looked around, and may spend some Lindens eventually. This ethereal and sexy outfit comes with many layer options, and is complete with the shoes, and topless variations.

In summary, fur creators need to get on the freebie bandwagon and start to offer some quality goods to their audience. If I am not aware of opportunities, please tell me I am wrong. If you want more fur articles, please let the fox, Bixyl Shuftan know.
Until next time, this is DrFran aka Desirée saying: “Hunt well!”

DrFran Babcock.
Posted by Bixyl Shuftan at 6:30 AM No comments: 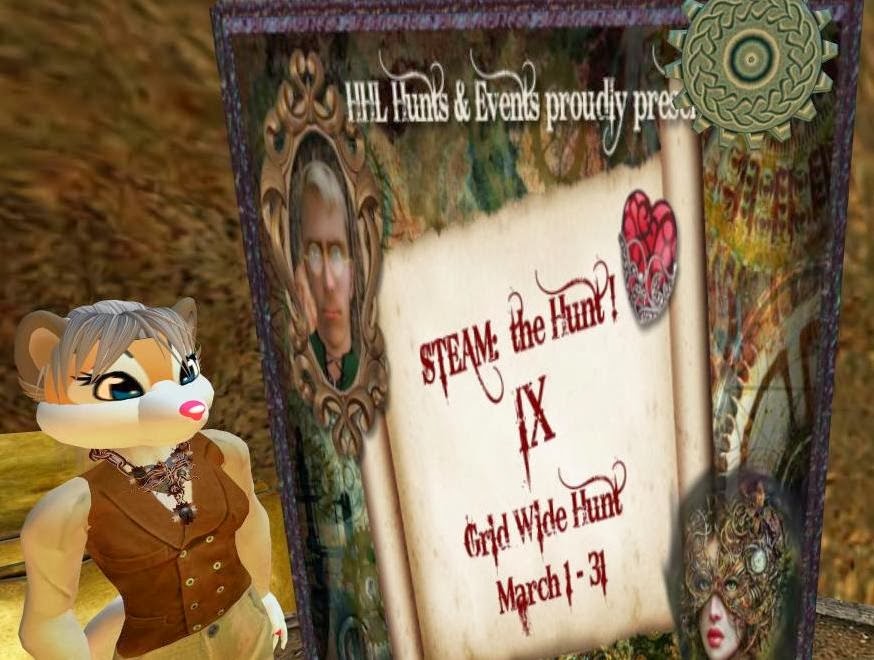 Steampunk fans have been eagerly awaiting the Steam IX Hunt because it is the only Victorian steampunk-themed hunt that covers the entire SL grid.   The Hunt began March 1 and will run through the end of the month.   There are over 125 shops participating this year, including three that are located in Steelhead:  SparkWorks,  Luminous Designs, and St Helens Dry Goods.
SL resident Perryn Peterson organizes the Steam hunts.   He does a great job of keeping everyone informed about updates and issues while the hunt is in progress, too.   Peterson is also the Mayor of Mieville, where the Hunt begin.  The information center is at Mieville Doyle Victorian Steampu, Mieville Doyle (79, 72, 26).    Although I started there, I soon went off to Steelhead to check out the shops there. 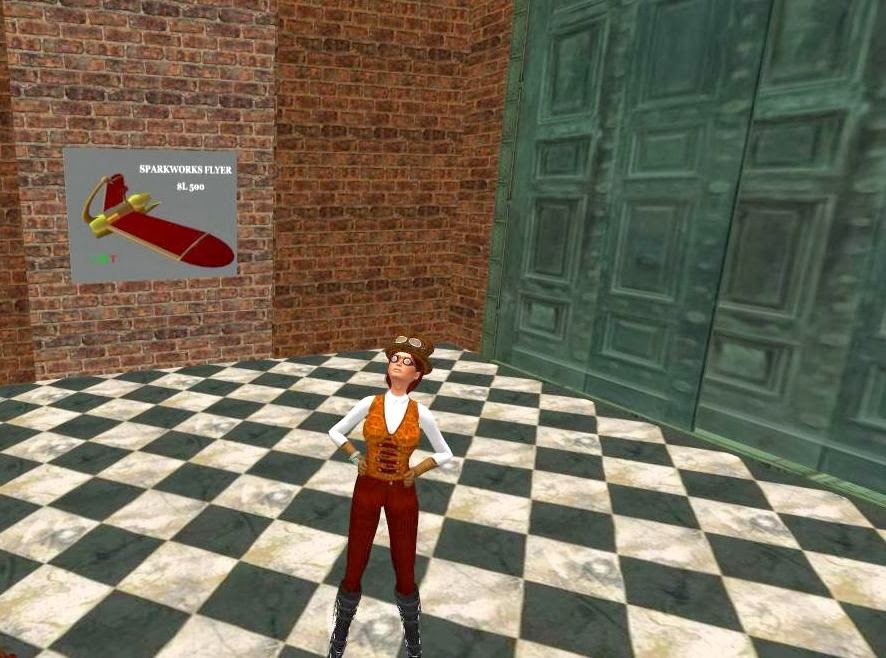 SparkWords is located at 135 Harbor View Way in Steelhead and can be found at SparkWorks, Steelhead (149, 224, 25).    It is Shop #58 in the Hunt, and located on the corner end of a Victorian brick building.  The space is long, narrow, and at least 2 stories high.  It sells a number of Steampunk gadgets and weapons.
Most of the shops in the Hunt will post a hint to help you find the steampunk gear that holds the prize and the landmark to the next shop.    The hint at SparkWorks read, “Don't get lost in all this space."    This was a tricky hint since it could mean a number of things.   The shop occupies a large area (space), but it also includes an item or two that are space related.    I began looking high and low for the elusive gear.
While I was hunting, resident RoseRed Ruby entered the shop.   I could tell she was also searching.   After a few minutes of hunting she zipped away, apparently having found the gear.   It took me a few more minutes of hard searching, but I finally found  it, too.   I can’t say any more about it, or the clever prize inside, because it might give away its location. 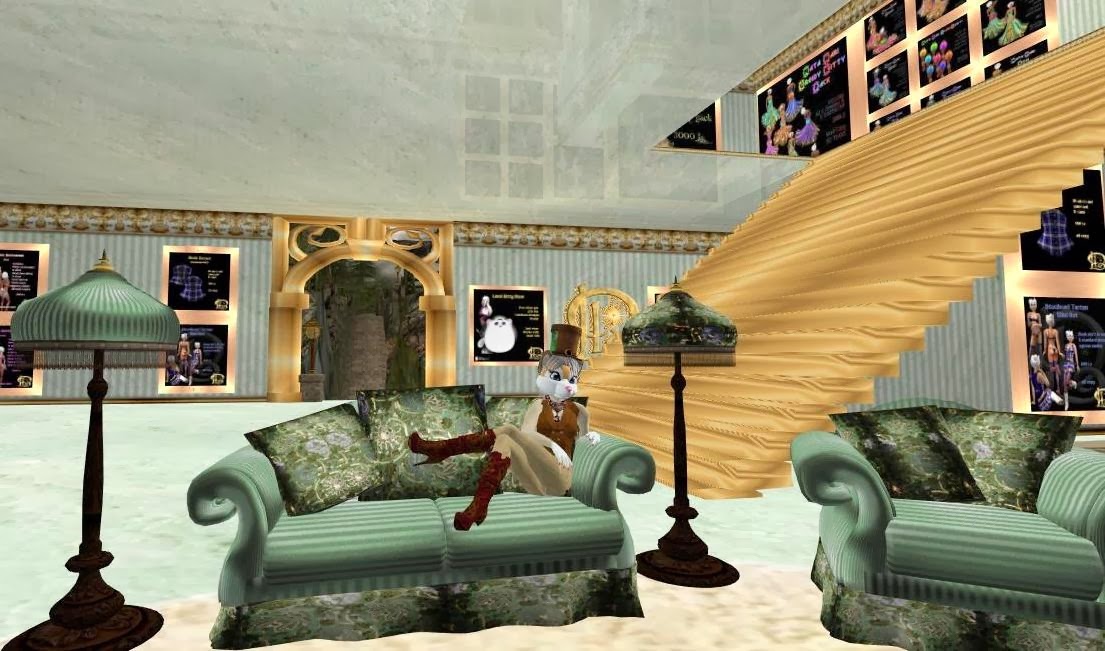 Next I went to Luminous Designs, which is at Steelhead St Helens (214, 33, 37).   I had a little trouble finding it by using the Hunt landmarks.  I teleported in but then had to walk a short distance to find the store.   However, the walk was very pleasant.   The cobblestone sidewalks are lined with pines and beautifully landscaped.    The store is very tall and easy to find.
By the time I reached Luminous Designs I was ready for a quick rest.   The decor, as well as the items in this shop, are very upscale.  LD sells Steampunk, pirate, kimonos, and other glamorous clothing for both men and women.   Near the stairs I spotted an ad for SL Newser hanging on the wall, another sure sign of a quality establishment.
The Luminous Designs store is very large, but it has an efficient teleporter.   I zipped up to the Steampunk section and began to hunt.    I found this gear very quickly, which left me some time to shop.   I took the steps up to the top floor, where there was a sale sign, and ultimately ended up looking all around the store.

The third shop on Steelhead is the dry goods shop found at Settlement 601 - St Helens Dry Goods Frontier Supplies, Steelhead St Helens (68, 156, 38).    St. Helens Dry Goods is Shop #117 in the Hunt.  They offer a very good cup of expresso to visitors, which I enjoyed while I looked around.
They have all the items you might expect in a dry goods store, including a little furniture, some lamps, a variety of hats, and even gentlemen’s walking sticks.    Plan to spend a few minutes looking around this quaint shop.
The other shops are located all over SL.   I visited Tamiron Forge, which is shop #11, located at Tamiron Forge, Island Dream (154, 38, 21).  The prize there is a Heavy Heart Neck Chain, which I am wearing in some of the pictures.   I found the gear in Shop #8, Lindy Modern & Retro Shoes, located at Mieville Twain (209, 168, 22).  I was rewarded with a beautiful pair of Lindy Alexia Special Red Boots.    I love boots!
A few gears have eluded me, but I plan to find them before the Hunt is over.    One of these places, The Steam Rose, has secret rooms and lots of hidden treasures to see.   Find it at The Steam Rose, Chillium (175, 81, 1596).  It is one of the most imaginative places in SL and well worth a visit even if you don’t participate in the Hunt.  But I have a feeling that the prize here will be worth the effort.   I couldn’t find the gear during my first trip, but I had a great time looking for it.   Two other shops are nearby, Steaming Ahead and Gothics Musing, both located on Chillium and connected to The Steam Rose by paths, bridges, and teleporters.
More information about the Hunt, including pictures of some of the prizes, can be found at http://historicalhunts.blogspot.com.    Happy Hunting!

Grey Lupindo
Posted by Bixyl Shuftan at 6:00 AM No comments: